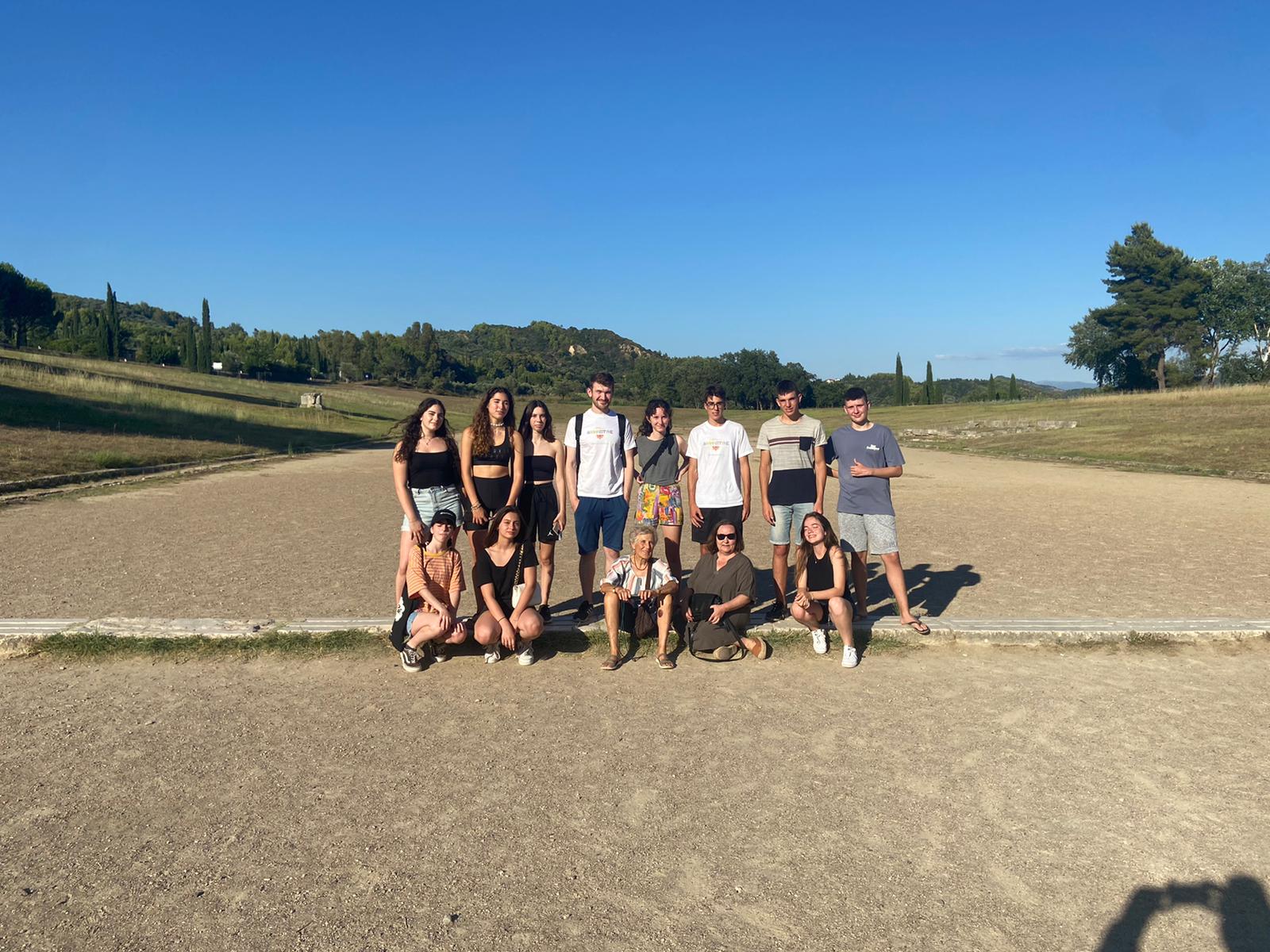 This July, I was in Greece as a group leader for a youth work camp. The camp took place in the small village of Ancient Olympia, in the western Peloponnese. Although small, the village is of great historical importance, being the place where the first Olympic games were held in Ancient Greece. Ancient Olympia also acts as the starting point for the Olympic torch run in the modern Olympics. Now, to the project. In total there were 12 participants, 9 teenagers and 3 leaders, and our task was to help restore the village’s botanical garden, which had fallen into disrepair. The botanical gardens were recreated by using the works of an Ancient Greek writer, so that all the plants are exactly the same as they would have been during antiquity. 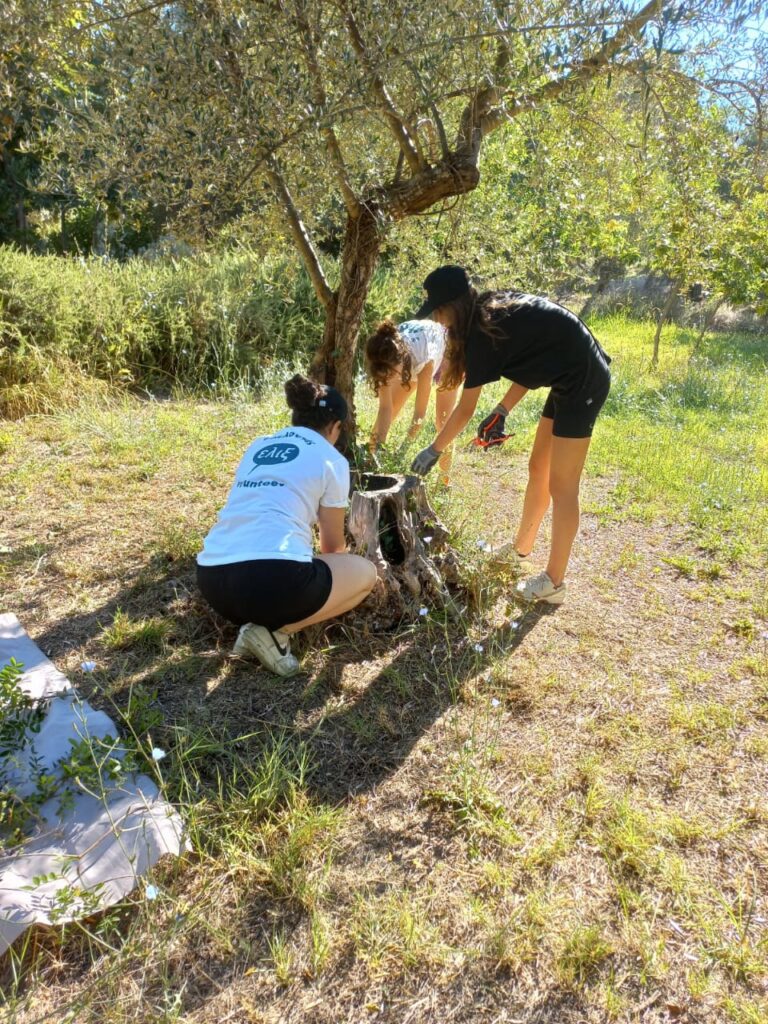 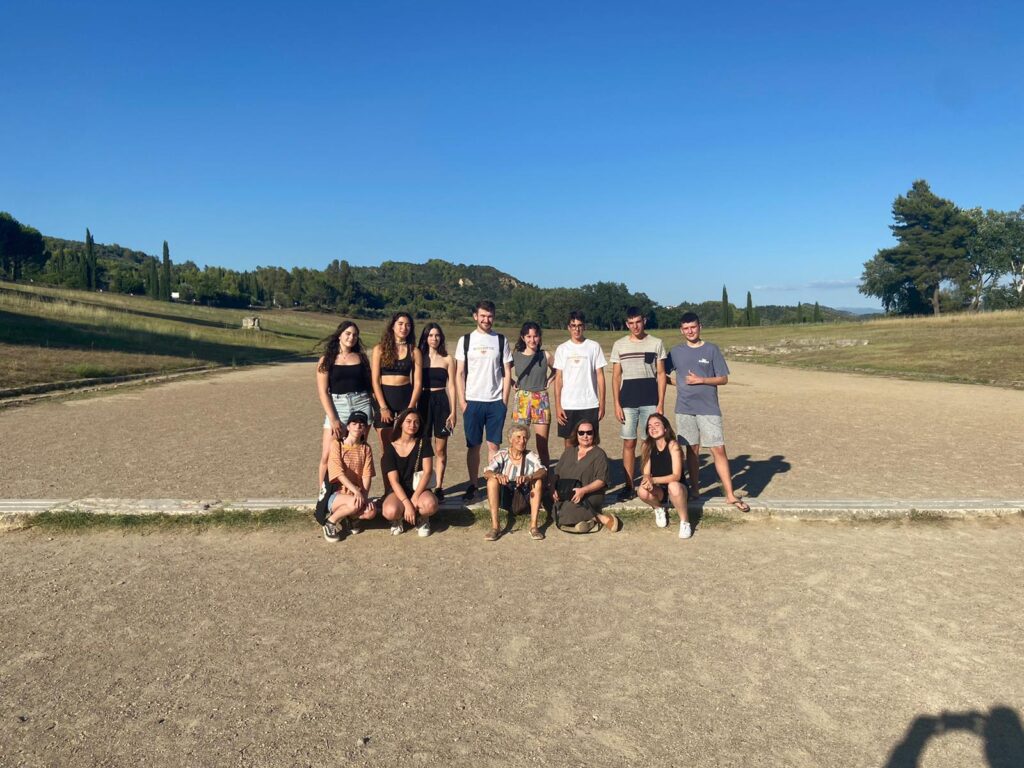 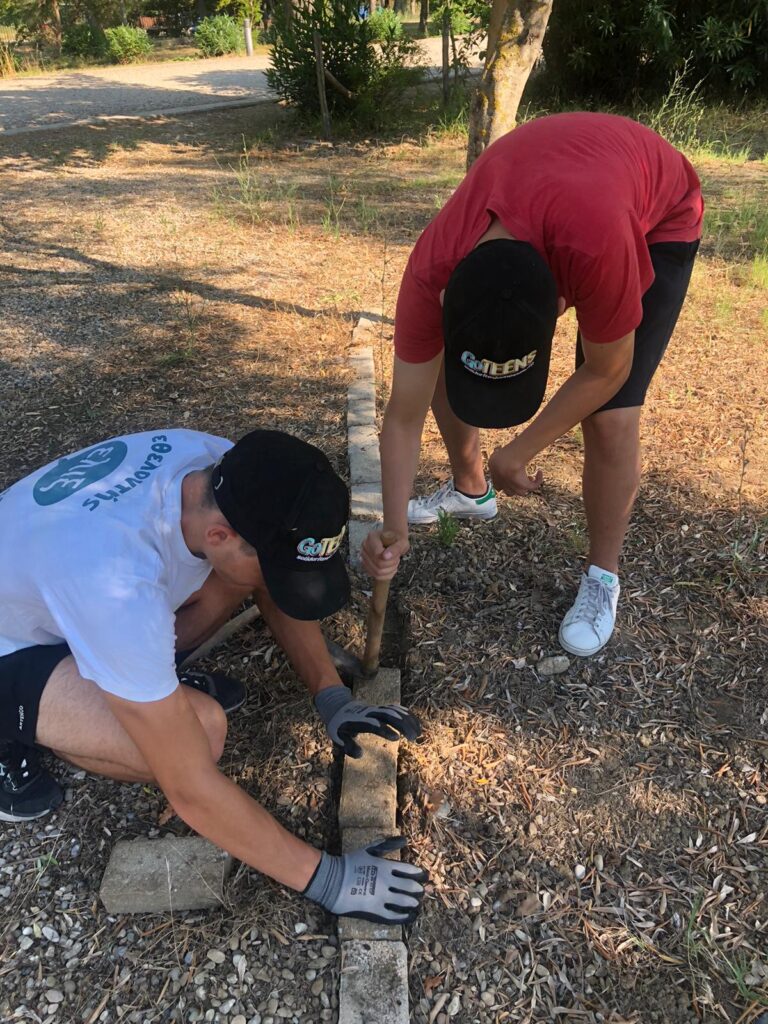 Every morning, we would wake up early to have breakfast before 8:30am, so that we could work while avoiding the hottest part of the day. We would start our work day with some exercise, which was led by my colleague Eleni, to loosen up and to get our blood flowing. After this, we were ready to work. We split into teams, with one focusing on cutting back overgrown trees, the other watering plants and the last fixing the foot paths. The work was physically tough, but we stopped regularly for water and snacks. Then, after around 3 hours we would finish our work and eat a typical Greek lunch together, which, as you can imagine, included a lot of feta cheese and tzatziki. We would sit and chat over lunch, with many interesting conversations and lively debates about which person’s country had the best food. After lunch, we would typically play a lot of fun team building games at the hotel, and then give the teenagers some free time to go to the pool or explore the village. Then every evening at around 8pm, we would have dinner on the balcony where we would be treated to mountains of Greek food, such as moussaka, pastitsio, bifteki, tzatziki and my favourite, portokalopita, a Greek cake made with orange syrup. 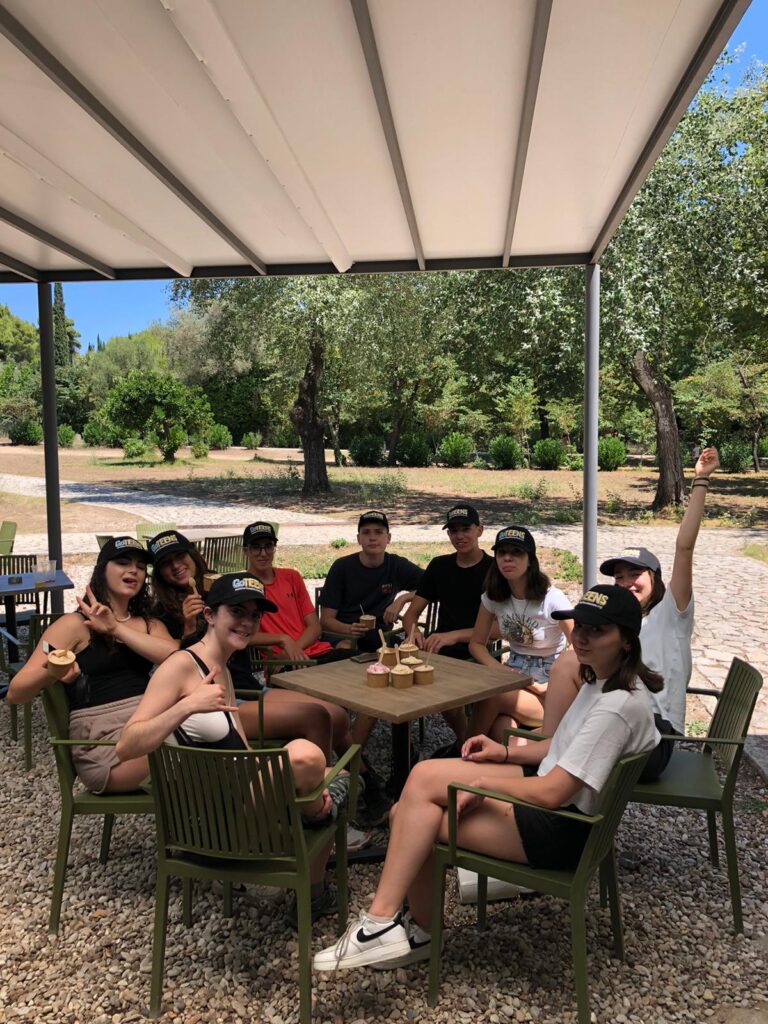 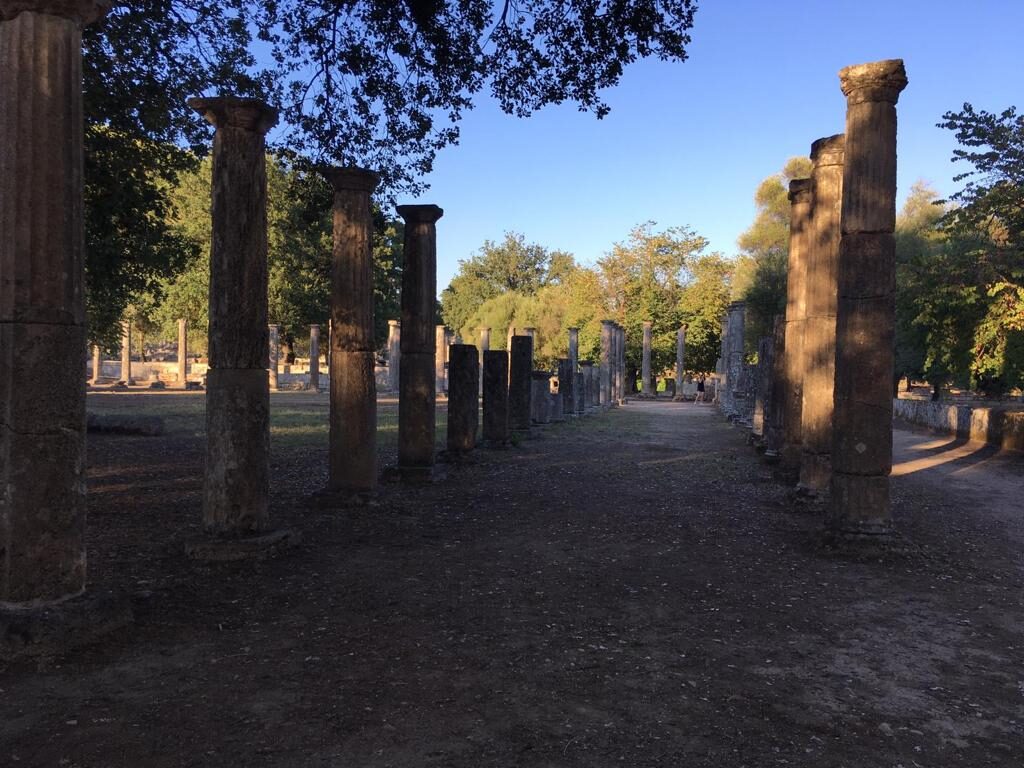 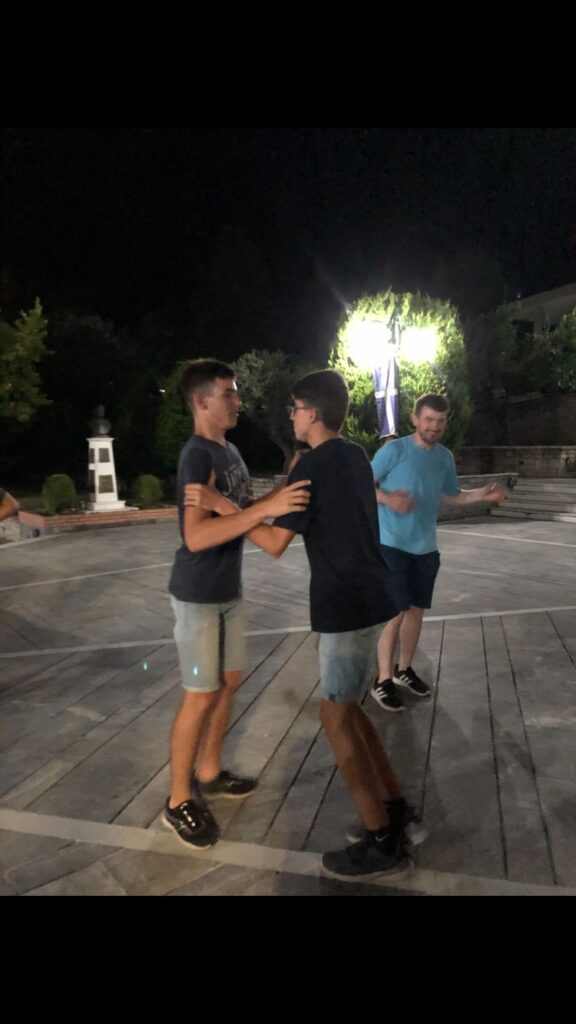 Normally, after dinner we would play games such as charades or werewolf, and then give the teenagers time to do their own thing, as long as they were back by midnight. On another day, we visited the archeological site of the first Olympics, and were given free tickets to enter the museum which housed a fascinating variety of ancient artifacts, such as temple columns and statues of Greek gods. One evening, Eleni used her local connections to organise a Greek party in the village square, where we were taught sirtaki, a traditional Greek dance, and the hotel brought us some souvlaki, meat on a skewer, and spanakotiropita, a feta cheese and spinach pie. We spent hours dancing to Greek music, playing games and chatting with the locals. I even showed them a traditional Scottish dance called Strip the willow, which turned out to be very popular. On another day, we went on a group trip to a beautiful beach nearby called Samiko, where we went swimming, played volleyball and sunbathed. The last day was the most tiring. We got up before 6am in order to get the taxi to Pyrgos, where we then caught a 5 hour bus to Athens. When we arrived in Athens, we said our goodbyes and I went with one part of the group to the airport to catch their flights, while the lucky group with later flights got a tour of Athens, visiting places such as the Acropolis, Syntagma Square and Monastiraki. I left Greece the next day having improved my leadership skills, confidence, and, of course, with a lot of good memories and extra weight.