From Germany to Estonia: impressions of the ECS-project19 May 2021Next 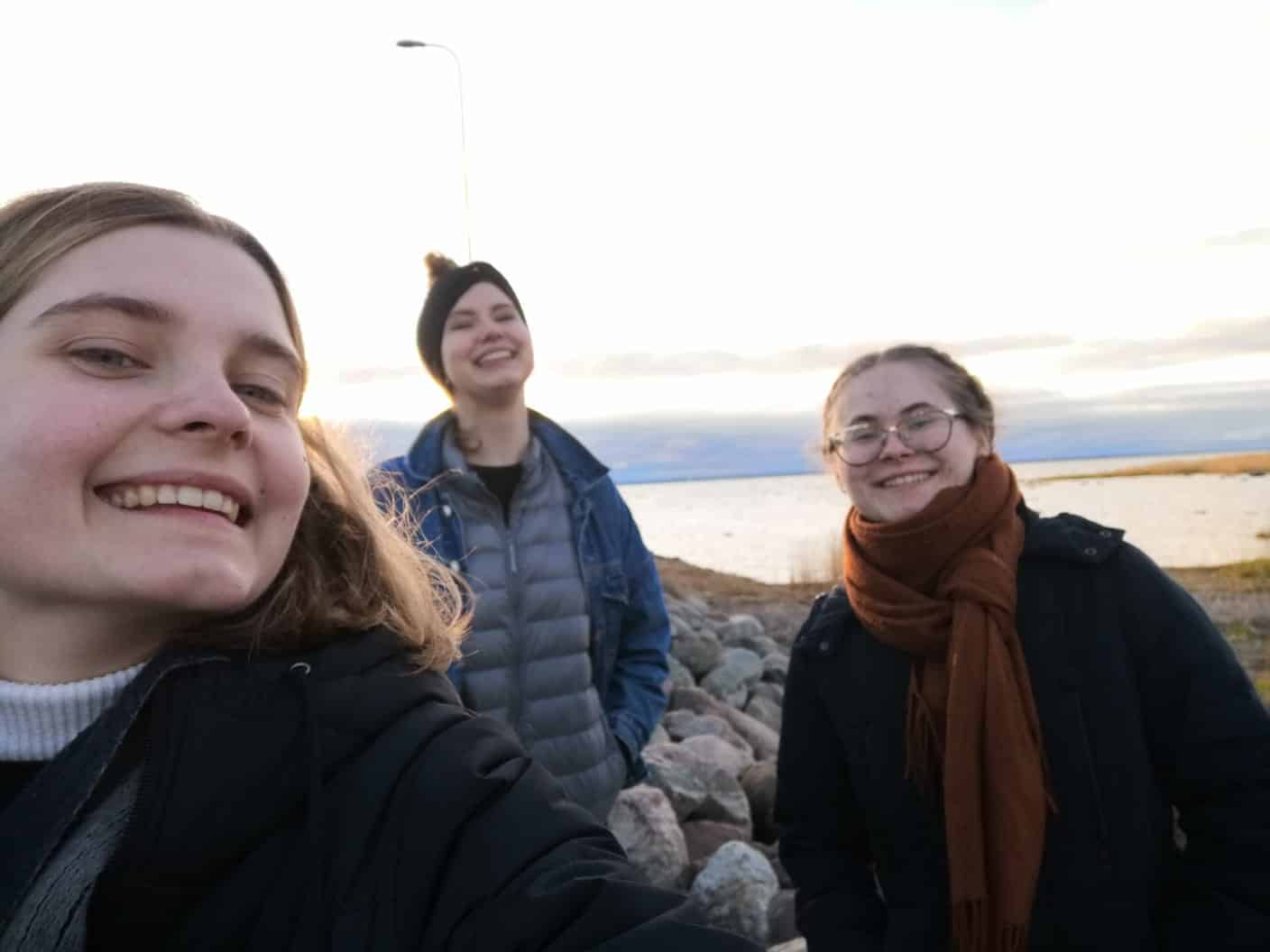 My name is Lena, I’m 18 years old, I’m from Germany and I am a volunteer here at Britannica language school since September.

So, I work at a language school for children and teenagers. They study mainly English, they also had German lessons, but because of covid right now they’re not taking place. In school, they prepare those children and teenagers for the Cambridge exam. It’s a testing of the English level. They do preparation for these exams, and in general, especially for young learners, they also usually just teach English. I just work there and help, I help checking homework, of course with covid we’ve been on enough online, but also I play with kids in between lessons, I help in the lessons I do things like copying and some printing stuff. Also I do like some small of German lessons so I have like 3 very nice German students and I tried my best at teaching them.

I’m kind of obsessed with English if that makes sense. Back in school, English was my favourite subject and I would say I can speak it pretty well and I know the language pretty well because I have this big interest, since I was like even in primary school it was always my favourite subject. So get seeing how languages taught to the people like my age and younger is just really-really interesting I think. Also I thought about becoming a teacher sometimes and I thought why not just give my passion to English to younger people. I just really like the project that’s why I chose it.

I was definitely kind of expecting like living as a volunteer to become more independent because I’m pretty young, I’m 18, so I finished school last year and this is the 1st thing I did after school. I only know like living with my parents so I think what I thought was like I’m gonna be more independent, it’s gonna be adventurous to live alone this for the 1st time. Also for my project I think I expected I could teach English and get a little bit behind the scenes of just how teachers work and how a school works although mine is not really a school school it’s more like a small hobby school. But still it’s really interesting and I really do appreciate my teachers more because it is a hard job and it does take effort. So I was kind of expecting to just learn more for myself.

I definitely think my expectations were met I got to see a lot of different things. Of course with covid sometimes it was really hard for me because we’ve been online a lot and of course it’s hard to work as a volunteer when you’re working online and also of course it’s harder understandably for the teachers, harder to improve their lessons. Overall, I think I have so much fun just getting to know what it’s like, I really love it, the kids are so nice, and I am learning a lot in different areas.

There are many funny stories with kids, especially with the young ones, of course, the older ones just speak in English but the young ones just started learning English in school and sometimes you can’t really communicate with them. I’ve had so many moments where I said something and they had no idea what was going on. And they speak Russian and I don’t speak Russian so I was saying, “Да-да,” all the time. Also I started using word ‘что’ because I learnt it from here, they always laugh when I say it. Generally the word ‘yes’ is the most important one in the language. There’s one guy, he is 6 or something I don’t know his exact age and he’s super energetic, always like when he comes to class he tells something and if the teachers there the teachers like, “Oh, interesting. What was it?” Then once in class he sat next to me and I was helping him with some crafting or something and he told some big story I just sat next to him and just was like, “Да, ага,” because I had no idea what he was saying, so I just pretended to understand. This happens a lot. I think it’s the funniest story.

Now I don’t often feel uncomfortable due to the language barrier, because you kind of get used to the things even though you don’t know the language on one hundred percent. I have one story from my 1st week here I think. My roommate and I were going to meet with some other volunteers in the city centre. We took a bus and then needed to change the bus. You know that there are those buses like on Google maps are blue, they are not red but they are blue like the numbers and there are other busses where you need to pay extra to use them but we didn’t know that, we just walked into the bus because Google maps said that’s a number we can use and we walked in, usually in these buses you need to go in front because you need to pay with the card but we didn’t know that, so we got in back and the bus driver screamed at us in Estonian so hard and we didn’t understand a word. I think even now I would not get what he was saying but, yeah, he screamed at us so loudly and we just got off because we were scared we didn’t know what was that. And then I was scared to take these buses again. I don’t know if that was the language barrier or it was just scary.

Maybe Estonians would disagree with me but I think that Estonian and German culture are not that different, of course a lot of things are different, but overall like food for example is really similar. I have more contact with Russians so I would say yeah there are a lot of differences. The 1st thing I noticed is like I’m German I respect the traffic lights when you cross the street, I hate going when it’s red but other people, all other volunteers I met just cross the street, they need to go to the other side and they just cross it randomly. For me in the beginning this was really weird. Also another culture shock, potatoes here are so cheap, I can get a kilogram of potatoes for 17 cents, I was genuinely so shocked. I went to the supermarket and I was like oh everything here is kind of the same as in Germany or some things are even more expensive and then I learnt that you can get a kilogram of potatoes for 17 cents. And I’ve eaten a lot of potatoes.

Before coming to Estonia I honestly didn’t know that much about this country. I was actually super embarrassed when I just came here.  Of course I knew something about the language. One of the biggest expectations I had was learning Estonian language fully and like being expert immediately, which is not happening with any language. Of course I have other stuff to do than learning languages also I wanted to learn Estonian but I work with Russians and also I’m supposed to speak English with them. I need to speak English with them because that’s what I’m there for and I’m there for teach English, talk to children in English. Yes, I think learning the language was my biggest expectation that I didn’t fulfil sadly but I think it’s possible well maybe not perfectly but possible to learn it if you make more effort. 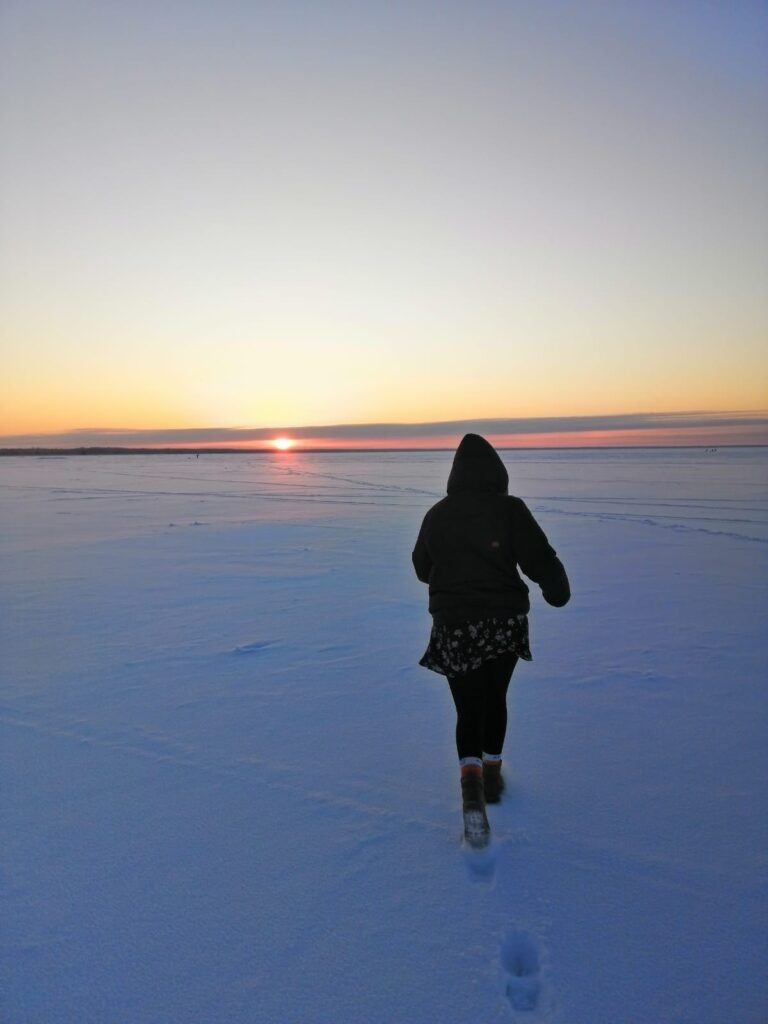 I have so many favourite places here. In general Tallinn is such a beautiful city and what I realised over the last month was that Tallinn is the perfect sunset city so I have like a lot of spots where I can watch sunset, so Tallinn for sure. Saaremaa I was there two weeks ago. It’s one of the nicest places. So many Estonians are always like talking about that place, they say, “You need to go to Saaremaa.” Now I finally get it because actually it’s a really nice place. Estonia has the nicest nature, all just looks so nice. I think a lot of stuff looked nice in the winter when it was snowing. Everything looked so beautiful but I would say Saaremaa was really nice, Tallinn is a really nice city, Tartu is also really nice. If I here in Tallinn and I need to zone out a bit and just be for myself I usually go to Pirita, so I would say that that’s my top spot.