From Germany to Estonia: impressions of the ECS-project

Olga shares her ESC project experience in Estonia28 April 2021Next

From Germany to Estonia: impressions of the ECS-project 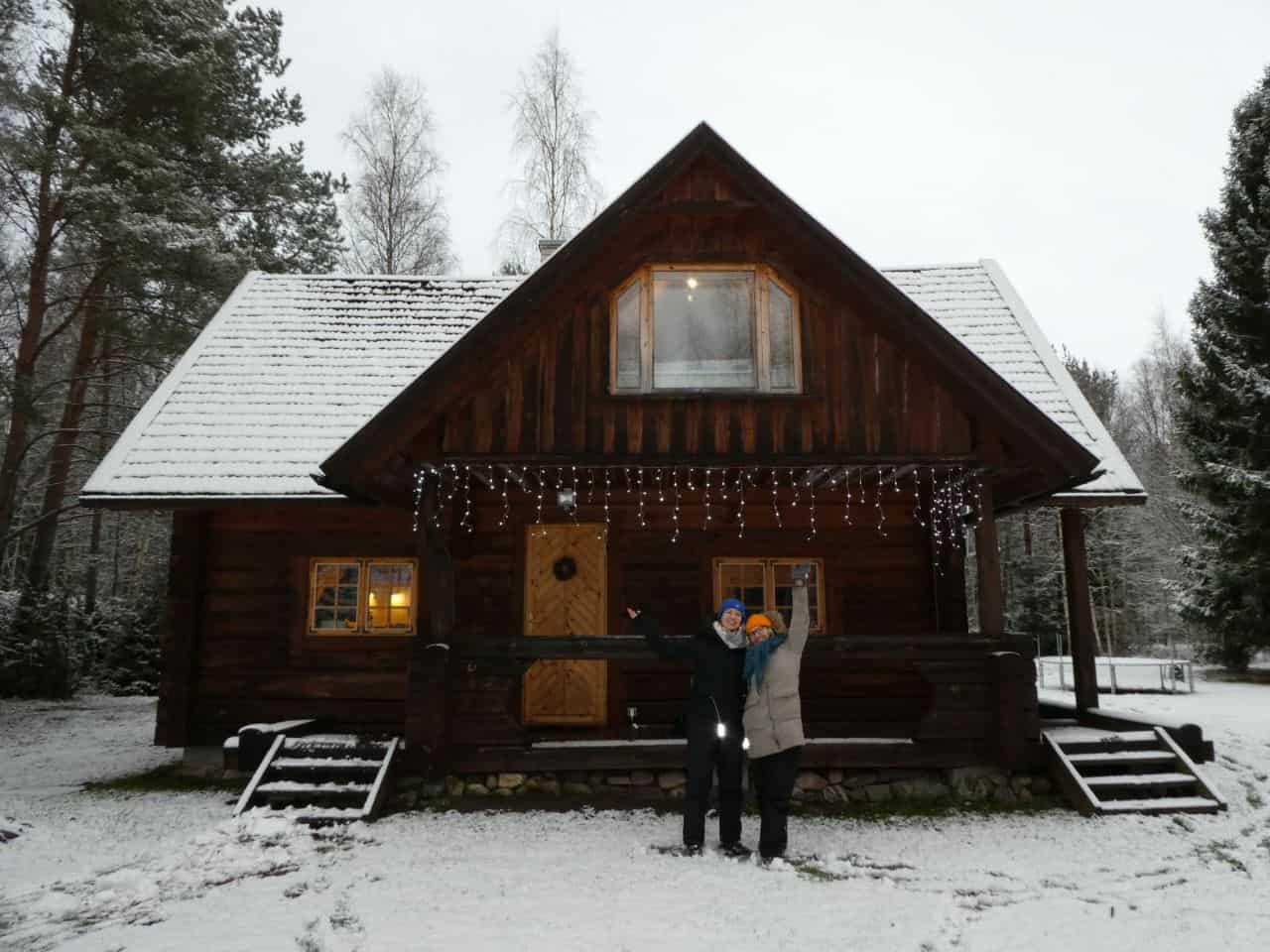 I’m Janne and I am 20 years old, I’m from Germany. I’m in Tallinn since October. I’m working in a kindergarten and I am staying until the end of May.

I work with children, in a group of 5 to 7 year old children. All my tasks are playing with the children, also helping the teachers with tidying up, sorting pictures, whatever. I can also bring in some ideas for crafts for example or I do weekly gymnastic lesson with the children and sometimes we bake together.

My first impression  was really good. They all welcome me very well, the children as well as all the teachers. So I was really happy. I’m still happy to do that project and people here are really-really nice.

When I came here I was a bit afraid because I came here alone I didn’t know anybody, a new country and anything. So I was a bit afraid to not meet other people but on the 1st day I already met some of my roommates, and now I met so many people. And I really enjoy the volunteer life because you go to work and the work is something you really like and in the afternoon you usually can explore the city and also on the weekends you can travel around Estonia or at least you could. Because of covid it’s not really possible at the moment, but I already did a lot of trips because in October last year the situation wasn’t that bad so I really enjoy it.

I came here and I didn’t really have any expectations to be honest. And it was really spontaneously for me, the project, I applied for it a month before I came here, so I didn’t really have that many expectations. But when I look back I can definitely say that I enjoy it most of the time not always because sometimes I was really tired of the work. Because I work 7 hours a-day and when you are surrounded all the time by children and you always hear a language you don’t really understand and that’s really tiring I think. But most of the time I really enjoyed everything.

There’s one child in my kindergarten, she always uses 1 word which is «lahe», it means cool in English, I really get along with her very well, we’re just having a lot of fun together even though she’s a child like she’s young I think she’s 6 years old and still we just having a lot of fun together. And I always heard her saying the word «lahe», so I started saying the word as well. And it’s just super funny because two friends of mine and we kind of have a group together here and they’re also both from Germany but I met them here and we actually started to define ourselves through this word «lahe» so basically we’re just a group of what is called lahe. All the time we just say this word I think it’s funny because it’s just a word that means cool but we just saying it all the time and also we found out that there’s a place in Germany called Lahe probably pronounce in another way but we already decided to go there one day and we want to take a picture in front of the city sign and we’re just going crazy about this word. I think that’s pretty funny.

I started learning Estonian when I came here and at work I’m always surrounded by this language. I only speak Estonian, the teachers try to speak English but they are not really good at it I would say. Except for my tutor. During the first month, she always talked to me in English but now she also started talking to me in Estonian. And I got myself a book that I can learn Estonian with. With the children, I feel like that’s super, super funny, I don’t know. I somehow managed how to really talk to the children even though I most of the time don’t understand what they are saying but I’m just pretending to understand, I’m saying yes or no all the time. Relying on the way they are pronouncing the sentence I try to figure out what I should say, if I should say yes or if I should say no or whatever. But for now I feel like I can really talk to them. Sometimes it’s still hard but most of the time I can have conversations with them which is super cool. Yes somehow it’s working.

I have some special places for you in Estonia. There’s one, the Port Noblessner, which is a harbor in Tallinn. I really enjoy going there, I often go there when the weather is nice. It kind of reminds me of home because I am from the north of Germany, I live at the Baltic sea and we have a place that looks similar to this one and I just really enjoy being there. Also there’s one viewpoint I don’t know the name of but I really like this one, just to stand there because you can see the roofs of Tallinn and I really like it. In general I really love the Old Town it is so beautiful. Also one coffee shop that I like, which is Caffeine EE it’s a coffee shop that I go really often here in Tallinn and I really like that coffee there and I also used to go there very often with my friend and we just had some talks and so that’s really nice.

Did something surprise me in Estonia? I’m not really sure. I wouldn’t say that it surprised me but the winter for example. We had a really long winter and usually the weather in winter in Germany is like sometimes we have like +10ﾟ and here for the first time of my life I experienced -20ﾟ and we had a lot of snow and so that was cool for some time but it just didn’t stop being cold we had like winter for four months or 5 months I don’t know. But, yes, I wouldn’t say that that was surprising for me but it was definitely a new experience for me to have such a cold winter. 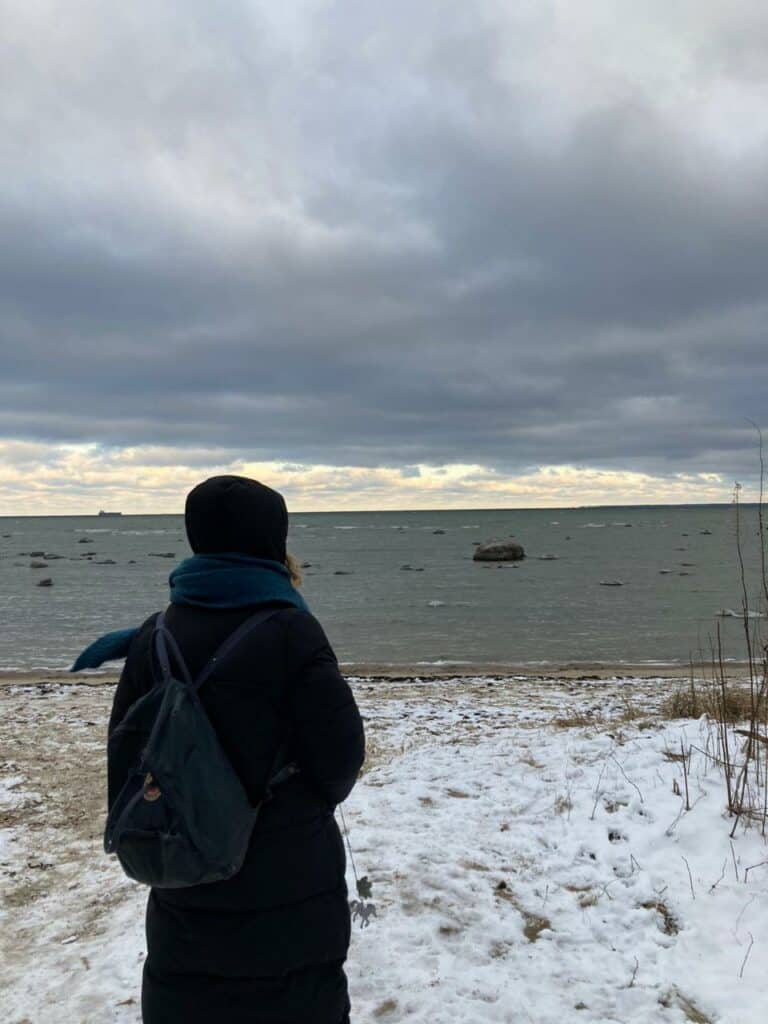 I think there are many new experiences that I made. For example, just coming to a new country without I mean all I knew about Estonia was where it was located but I didn’t know anything about the people. I don’t know anything about the country itself. Meeting so many people from different countries and working in another country is just weird and definitely an experience for me. I still lived at my parents’ place at home and so I came here now have to cook for myself. I have to go grocery shopping for myself. I just have to do everything on my own. I think there are just many new experiences and the people that I met here. I mean I know them now for like 7 months I think and before that I didn’t know anyone of those people. But since you come here on your own without knowing anybody and you don’t have your friends with you I feel I became more open to other people because you somehow have to adapt yourself to the people and because they are the only ones you have you don’t have your friends here. I feel like that’s a really cool experience and something that I also discovered about myself that I can easily get to know other people if I have to. I think that’s mostly living on my own, I think that’s the biggest experience for me outside.

Before I came here I already knew what I want to do and I want to start studying physical therapy and I really like children but I also discovered for myself that I don’t want to work in the kindergarten later. But still that doesn’t mean that I regret having done this project but it’s just for me for doing volunteer services it’s perfect but it’s nothing that I really want to do with the profession afterwards. But that was also not why I chose this project and I mean I new what I wanted to do and I already new that I don’t want to work in the kindergarten before. So it’s not that I found it out here because it was so bad or something. As I said I don’t regret any second but just I know that I want to study physical therapy. But maybe I could specify on working with children or something because I still like children.

I feel like I’ve grown so much here as person in Germany we say like you jump into the cold water I don’t know that’s also an expression you can say in English. You have to be able to cook you have to do all the things. Like when you just stay home in your city and you just go to University I feel like I had such an exciting year and also compared to my friends at home they’re just I mean also because of covid it was just boring as heck. It was boring at home, I just experience so much here, and I feel like that’s just experience for a lifetime. I will never forget the year that I had here I’ve just grown so much as a person.