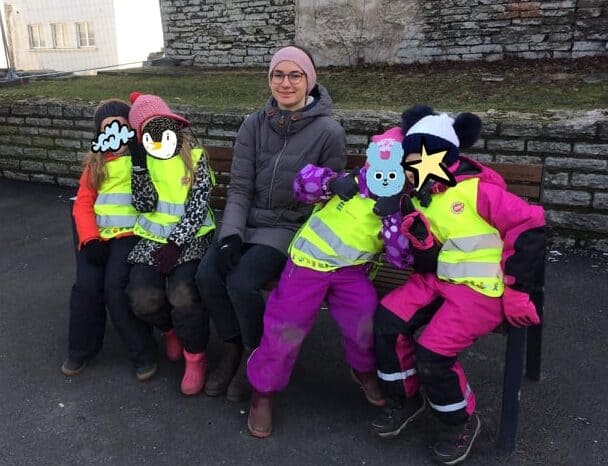 Hello to everyone reading this blog and at the moment, my report about how I established recorder lessons as a volunteer in a kindergarten in Tallinn!

I started my service in the beginning of September 2019 and yes, just like many volunteers, I was struggling at first. Actually, quite a lot I would say, I was wondering about way too much, basically everything; how to fit in at work, in my flat, among other volunteers, how to shape healthy routines in everyday life, about what people expect from me and what I really want to do during this limited amount of months abroad in a beautiful country, all in all how to seize this opportunity in the best possible way.

And here comes the first lesson I learnt for and by myself – it is completely alright to wonder. It helped me a lot to figure things out slowly and to realize the path I wanted to choose.

Around December one thing that turned out I was deep insight longing to enhance was the contact with the children in the kindergarten and also I was wishing to leave them with something sustainable, something that would stay with them for a bit longer than the 10 months I was planning to spend with them. At that time in my opinion appreciating and valuing what one has got at home is one of the great things to experience during one’s volunteering service. For me personally it was my music school.

During my entire school time I was lucky to learn how to play the recorder and the oboe. It was clear for me to keep this in my everyday life even though moving to another country. While living in Norway some years ago joining a local wind orchestra worked out very beneficially for me and I tried the same in Tallinn but unfortunately did not quite succeed for several minor reasons. But either way that reinforced the wish to pass on some of my musical skills to others even more- the recorder turned out to be the more appropriate for children: it is not expensive to purchase and easy to handle and leads the small ones to nice tones only with a stick with holes and music-like sounds quite quickly plus it assures a relatively stable and to my ears enchanting timbre.

So I proposed the idea to my tutor in the kindergarten, got loads of support and the principal ordered five recorders which arrived the week before I left for going home for Christmas, which turned out to be pretty good timing in that sense. In January I returned to Tallinn with rough ideas about the lessons and my own first, by now very tattered recorder course book in my backpack. I talked to the kindergarten’s music teacher who generously provided me with some advices and Estonian traditional and children’s songs. Music consists of many important elements which can be challenging to combine. Beside dynamics and melody and harmony and so on rhythm (:pattern or placement of sounds in time and beats in music) seemed to me to be the one I could help the children with the most. It is fascinating how they can catch up often-played rhythms and reproduce them almost perfectly on other instruments- or on instruments at all when they have been sung before.

After having done that I felt more or less prepared. One tip for everyone planning to teach children how to play the recorder: put colorful sticker-dots next to every hole- it makes it a lot easier to tell them where to put which finger and which to lift.

But there was, as so often, the language I was afraid to underestimate. For me it is hard to assess my own Estonian language skills at that time but for giving you an idea: I gained level A1 in December, was studying for A2 and at work I felt fine chatting to the children about easy stuff but when communicating to adults I was strongly depending on English. Fortunately, I again was helped by the teachers and they translated a list with phrases I was intending to use a lot during the lessons. So the preparation part was done and we could finally start for real. The goal was to play two songs- ‘If you are happy and you know it’ and the European anthem also known as ‘Ode to Joy’- at the graduation celebration in the end of May. A long way to go starting from scratch but what I saw in many children was great motivation and eager to try this new thing.

Anyway, we decided together that we would let every child try it out and later on ask who really wants to continue practicing on a certain day once a week. At first, I randomly picked three or four, mostly before lunchtime and asked if they were ready to join me for the ‘blokflöötitund’. Which, as a side note, in fact is very similar to the German word for recorder and already made me smile and brought a warm, familiar feeling to me. My thoughts about the course were that the whole process, almost like a small ceremony, was supposed to convey several messages and have a more or less regular structure of happenings because patterns are always easier to remember.

One thing that I personally attach a lot of importance is sustainability and just like me the vast majority of the children in my group are growing up in a fantastic and privileged but unfortunately quite environmental unhealthy world where many many things are easily accessible and as easy as getting them is also getting rid of them. I really like the idea of caring and valuing the objects one owns and making sure they can be used for a long time, because they are made from limited resources. And also musical instruments kind of deserve and require some extra care for ensuring they produce euphonious sounds.

Hence before starting the lessons I made them wash their hands and afterwards handed out the recorders while telling them how to carry them carefully and asking them not to run on our way to the room, wiping them out afterwards and so on- also for adding a bit of a serious touch, because it is not a toy but an instrument. Some of them brought their own recorders to the kindergarten and kept them proudly in their lockers and showed them around, that was very nice to see.

Most children only made it to one lessons because in end of March some higher forces I probably do not need to mention again stopped us from coming together but the ones who joined more than one lesson learned very quickly and it made me very happy how they could tell me what to do before starting to play – nice to see small successes so fast.

So, the following 20, 30 or 40 minutes we filled with different small exercises, mainly aiming at getting to know the instrument. I talked to them about the different parts of the recorder, tried to spread some motivation by playing a song they knew and could sing along to and telling them my story of playing the recorder in short. We experienced different ways of blowing into it (first with a piece of paper which should stand unbowed straight up while holding the bottom edge for not to shock the kitchen ladies next door with trumpet-like noises- I liked to tell them the air should be like a very soft summer wind- that is easy to imagine and to copy for children), we went through how to put all of the ten fingers on the different holes and how to cover them completely, figured out what notes look like and which ones are long and which ones are shorter.

Maybe it does sound quite simple but children learn in very different speeds and whereas it sometimes even got boring for some, others were putting lots of energy and concentration into small things but everyone could take at least some first steps into the world of music. In the first lesson the main activity was performing one tone in a rhythm consisting of short and long notes. And there we had our very first song!

What are the outcomes of this project? I think besides the obvious goal of giving the children an understanding of recorders and music in general it is a bit hard to tell due to the sudden end (for the time being) of the lessons in March. But I want to believe that both the group, me and our relation benefited from it in several ways; firstly we got to know each other in a more intense way and what I personally did not expect and for sure learnt there was how much children can choose where to put their attention and just because they did not show interest in one project it does not mean that you should not try again to fascinate them and to teach them something.

When they actually find something they enjoy learning more about they are blooming like flowers and shining like the sun. Also, from my point of view it helped to become more of a part of the kindergarten family and having my own project also increased the meaning I saw in the whole thing. It gave me tasks and I could work on it more or less independently (but got help and feedback every time I needed it), ranging from cleaning the recorders and cutting out wipes for them to compiling a list after every lesson for later knowing better how to form the finial groups. I became more relaxed about dates because in a kindergarten things are always busy and partly unpredictable, and that is completely okay- in the end things will work out in one or another way for sure.

About the small ones: what I wanted them to notice during the lessons is that motivation and their learning process depends on them and it is up to them to learn how to play the recorder or not. Actually I was a bit proud of everyone who could freely tell me that they do not want to, even though of course I was also super happy to see that many enjoyed the lessons and got very enthusiastic about it. Another thing is that the ones I could communicate in English with were a huge help during the lessons. I think it does not happen often that children get to support adults but they are able to do so and it makes them feel very precious, strengthens their self-esteem and so on I think.

In general there was one thought occuring to me several times: these lessons were only one part of the children’s kindergarten routines and for sure a tiny section in their lives but maybe it is in a sense very exemplary for many aspects in life and I hope that some of the lessons can be transmitted and reused in other areas- with that I mean things like the earlier mentioned aim of caring about things, stronger self-esteem and acceptance and patience with varying learn processes.

All in all it was a unique experience which brought loads of joy to my life in Tallinn and I am very thankful for the support and positive feedback I got!

Hanna made her service within the project European Solidarity in Action, funded by Archimedes Foundation Youth Agency with support from the European Commission Solidarity Corps programme.