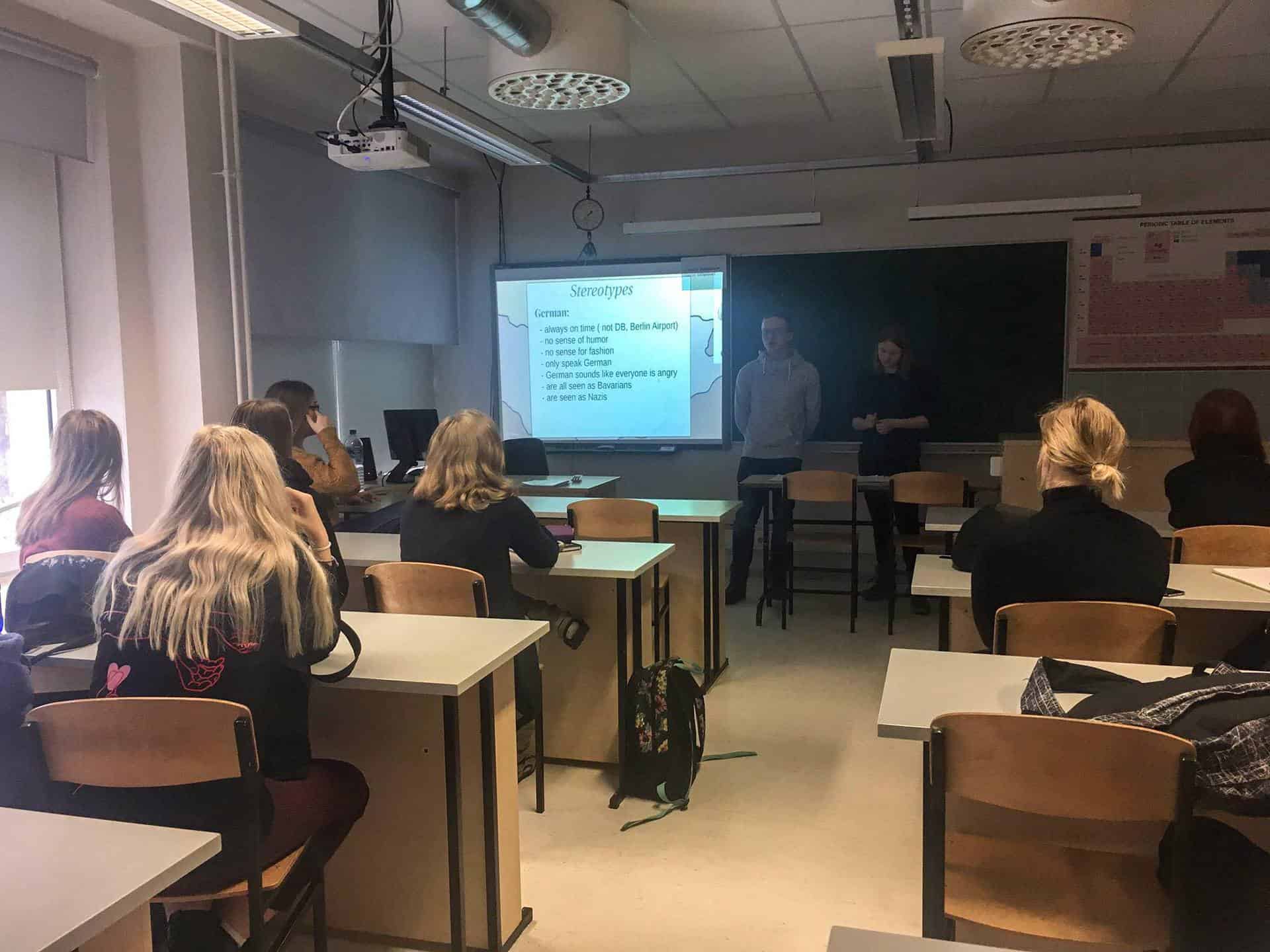 Our volunteer, Tiruhi, who was doing her service within a project Volunteering promote Goodness (among the other volunteers mentioned), which is funded by the Erasmus+ European Voluntary Service program, wrote a blog post about an experience in one Estonian high school.

Me and some other volunteers were going to the 32. Keskkool to make presentations about our countries during the Intercultural Communication course. There were youngsters  between 17-18 years. As it was the first class and it started 8 am, not many people came, just around 10. I told them about the politics, showed the country, national dances. I told some intercultural features, how people behave themselves in the transport or what kind of relations we have with our neighbours and relatives. Students seemed to like it and asked questions about my country. Next day, a different group came about 15 or 20 people. The time flew so fast that we had only 3 minutes for questions.

The other volunteer, Claire, was also talking about her experience in Estonia, EVS and Erasmus + program and about the situation in France right now. Claire had an occasion to share about EVS and mobility programs, as the students were willing to have an international experience after graduation. Since this program is not famous enough and she would have been happy to hear about it in high school. She wanted to share this with the students and hope some of these students will take this opportunity! After a short introduction she did a global presentation of France, and decided to talk about what’s going on in France with the yellow jackets demonstrations. The interest of the presentation was to give a new insight to the students, different than what they can hear in Estonian or international medias. It was also an interesting position to be in, as an outsider speaker. She didn’t stay in a neutral perspective like the teachers usually do. “Politics in Estonia and in France are very different, so it was interesting to compare both. We spoke about voting and for her it was surprising to know that here, voting right starts at 16 years-old for local elections. It’s 18 years-old in France and lowering it to 16 is being discussed right now. Their favorite part was when I was saying that when I moved here, I firstly found Estonians super rude.” To her, they’re into auto depreciation humor!

Two volunteers, Anne and Nora, made a presentations about Germany together! Both of them researched a little bit by themselves, in the end they tried to connect the things they found out. But shortly they realised that it will be a little bit too long. So Nora did the introduction to Germany and some facts and Anne talked about politics. I can imagine how nervous were they before the presentation. Talking about German politics and e.g. explaining the problem of right-wing populism was interesting on the one hand but on the other hand Anne was not so fond of her country of origin because she cannot share these views. Later she noticed, however, that even a small country like Estonia had similar problems. In the end they had ten minutes left to answer questions and maybe discuss some topics. Quickly the students asked them questions about their EVS and Germany. And the students were very talkative which was very surprising for Nora since estonians are normally so quiet. She said that she hopes that this was a good sign.

One of the other volunteers from Greece, Dimitra, shared her impression. She said that when you are volunteer you try to do different stuff for the first time. One of these things is a presentation of your country .”How difficult can it be? you ask yourself with a lot of confidence. But at the same time you catch yourself searching for different kind of questions and information because you imagine that they will ask you something that you don’t know.” So that was the mood the day before the presentation. “Ιn Tallinna 32. Keskkool everything was great – the students were welcoming and the teacher too, she was there when you feel that you don’t have anything to say and made me feel more comfortable.”

After Greece, students had the opportunity to know more about Spanish culture, political and social issues in the school. The day of the presentation, as usual, Silvia was pretty nervous, because it was the first time that she was doing a presentation completely in English. Silvia told that the teacher was super nice and friendly so she started to relax. Silvia arrived earlier so the teacher invited her to dance a traditional Estonian dance with her group during a little break that they have. It’s something that they always do apparently, and she kindly invited me. After her presentation. students had really nice words and interesting questions to her. After that, the teacher congratulated her and told that she really liked Silvia’s presentation and the topics that she talked about.

Volunteer from Russia, Alexandra, prepared a little film (in English) about Russia and people living there and after discussed advantages and difficulties of the russian life. They compared Russia and Estonia in some social and political aspects and everyday life. In the end of the lesson they played online quiz. For sure, one lesson was not enough to discuss everything Alexandra wanted, but youngsters could learn many things.

On the last day, it was time for Hendrik and Annika – volunteers from Germany.  But that presentation was not just about German culture in general (especially Swabian and Badish culture) but about prejudice and how to deal with it. This involved some discussions with the students: Why do people have prejudice? Do you know any prejudice about Germans? “I think they really liked being involved in the presentation too instead of just listening all the time.” Hendrik and Annika also talked a lot about German and Estonian prejudices and their own experiences with it. In the end, they promoted the EVS too and answered their questions about voluntary life. To overall, it was a nice opportunity to do something else than our normal work and to share our experiences with others, who might want to become a volunteer too.