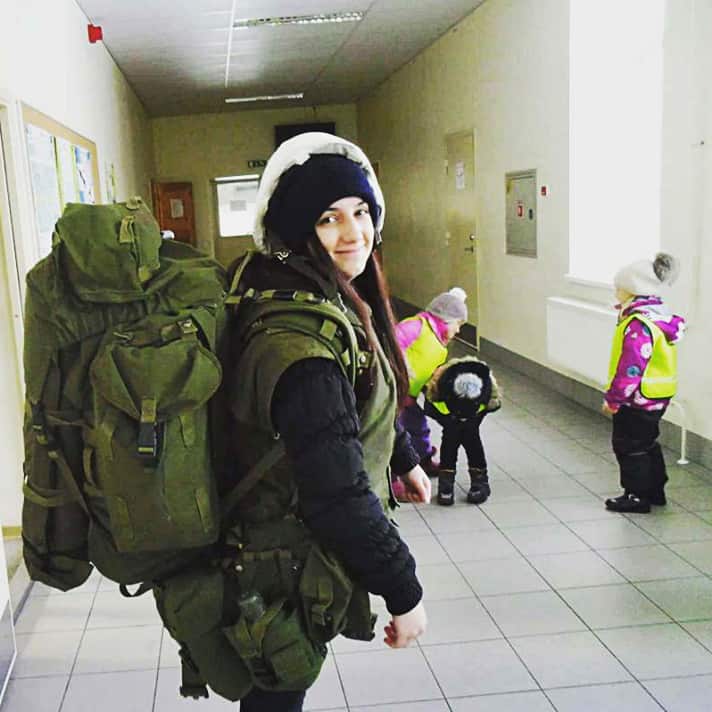 This week we will meet Araksya Martirosyan from Armenia. She spent her year of EVS in a kindergarten in Võru where she was enjoying her work and the beautiful lake right next to the city.

Did you choose Estonia or did Estonia choose you?
I guess it was both at the same time. When I finished my college where I studied in the field of pre-school education, I wanted to do something related to it. I found the project in Estonia which was so well connected to what I was doing before, so I decided to come. You are one of the rare volunteers who did something before that is now related to their project. After college I wanted to do something unusual so I decided to continue my path of education with this experience here. As it will help me to understand what I really want to learn in University. I think after my project I will have clear vision of my future education.

Do you have the feeling you learn a lot?
Yes, it is really good practice for me.

And how do you like Võru?
It is a small town but at the same time it is very nice. I really enjoy the lake right next to the city.

How does a normal day at work look like?
Usually I start at 9 o’clock. I work with 5/6-year- old children. In the morning, we do some learning activities or handicrafts, and then we have singing lesson or physical education. After that we
normally go outside for a little while and come back for a lunch break. If there is something to prepare for the next day, I stay and organize it with my colleagues. Also sometimes I take part in English lessons.

What do you do after work, in your free time?
I just finished writing my mini-project that took some time. Also I enjoy traveling in my free time and as Estonia has very beautiful nature there are many places which I’d like to visit.

How much or what did you know about Estonia before and how has this picture you had in mind about Estonia/Estonians changed during your time here?
I knew that Estonia is a small country in the Baltic region of Northern Europe. As my mother once had visited Estonia, she told me that Estonia has very beautiful nature. I&#39;m happy to have this opportunity to see it myself. I got blessed seeing deer into the wild more than 5 times! Nice moments which I captured in my mind. Also I heard that Estonians are very calm and they really like the sun, so when they see it, they sunbathe everywhere, where it’s possible. Now I know that the reason is the lack of sunny days. If now I do the same, am I Estonian?

Is there anything surprising for you about Estonia/Estonians and Estonian culture? Or anything that is very different and took time to adapt?
There were a lot of facts about Estonia that I didn’t know before I came here, like the one that Estonia has 2.222 islands. Also I didn’t know that singing played a major role in Estonia’s history. It was really surprising for me. I can keep going with this for a long time. I like Estonian culture a lot. I know that Estonia has the biggest collection of folk songs in the world. I like the festivals when you can see a lot of people wearing traditional costumes, dancing national dances. That time you want to join them and to dance all night long. I think I’m not the first to say that Estonians are really closed people. During this one year I met different Estonians. Some of them were really closed and indifferent, others were very open and friendly and others were closed and helping. In the beginning it was surprising for me too, but now I got used to that. So I will say that Estonians are very kind and nice people. 🙂

What is the one thing that everyone should know about Armenia and/or Armenians?
Armenia has such a rich history and so many interesting facts, it&#39;s really difficult to choose only one thing to tell. But I would say that the one thing that everyone should know about Armenia is the first country to adopt Christianity as the state religion, it dates back to the year 301 AD, and Armenia has one of the most beautiful churches in the world and actually, it’s free entry to all the churches. One of my favorite is Tatev Monastery (9th-century), there is a cableway from Tatev to Halidzor village, which was included in the Guinness World Records as world’s longest non-stop double track cable car. About Armenians I can say that we are very hospitable people. So everyone at least once should visit Armenia and make sure that it&#39;s impossible to stay hungry in Armenia, both spiritually and physically.

And finally the last question: Do you feel any changes?
Yes of course! I feel more responsible because I’m working with children. I also feel more confident and I’m less afraid of problems since I’m here.

Araksya Martirosyan stayed in Estonia for 12 months within the project ”Broadening Horizons” which is funded by Erasmus+ European Voluntary Service program.