Interview with volunteer from Italy07 April 2017Next 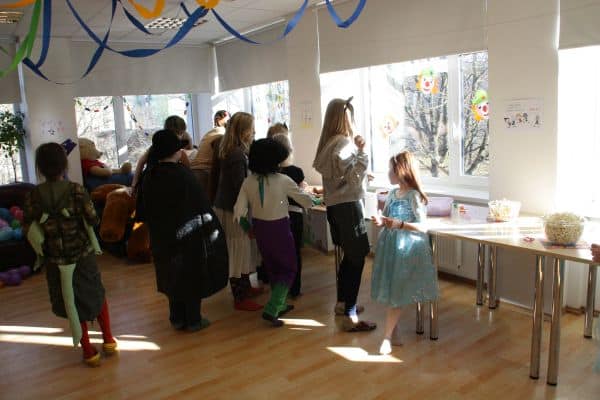 How to do or how I did my initiative project

The first step was to find an idea for the project. I already thought about this project last year and after the EstYES meeting, I planned already more detailed. I thought about the things that I will need and the activities that I want to do. After I talked about the project with my workmates and we finally found a month where we have time to do the project, I had to do the
second and actually one of the most important steps. I had to write my project description to apply for support. It was the hardest part to describe exactly what you want to do and what you need and especially to figure out how much money it needs to fulfill your project. 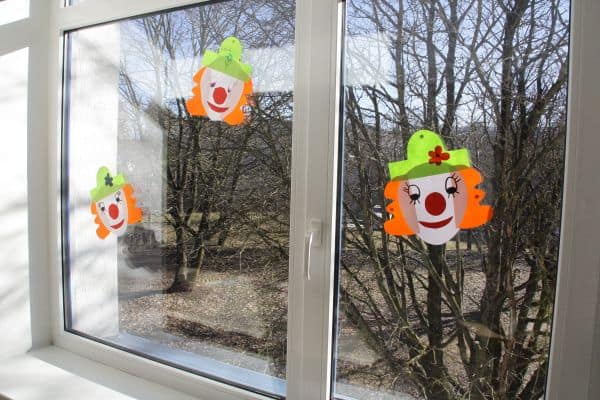 Then there came the point where you already wanted to do and to buy things but you do not know yet if your project gets accepted. About two weeks later I got the message that my project will be supported with 150 euros. I planned the budget with 200 euros but I also thought I would need more money for the costumes at the beginning. So it was time to do the third big step and I started to buy things. I looked already in different secondhand shops and also in online shops for costumes and costume parts. And it was quite sure that I will not find everything two weeks later in the secondhand shops. But I found some alternatives and also other things I didn’t find before. In the online shop luckily there still was the sale offer about one week left, so I
managed to get the costume parts kind of cheap. The face painting set was not there anymore so I just bought the most important colors and a sponge. I was so afraid that the package will not arrive in time but it came already about one week before the party.

The decorations I did partly together with the children in my project. First, we did our own confetti and paper curls and chains. Then I also tried to find decoration in the shop but I just found balloons and crepe paper rolls. Some costumes had not been complete. So we did wings and a tail and ears for the dragon shirt and the costume looked super cute. And I did my own leather indian headband. When the costumes and decorations had been complete there was only two step left before the party.

Next step was the food and drinks. I planned to do a colorful punchbowl and for the food, I first thought about sausages and salad because it is easy and you can prepare the salad already the day before. But because we had nearly every birthday party sausages and salad I wanted to do something special. So we had the idea to do hotdogs. And for sweets, I wanted to do traditional german carnival pastry „Mäuschen“. It is like Quarkballs fried in oil. And to make the carnival feeling perfect we needed also popcorn. Because in Germany you can get popcorn in little packages during the parade and its one of the things children like the most. They also throw a lot of sweets during this parade and the children try to catch them in the air or collect them on the street. So I bought some sweets like bonbons and small chocolate bars that I can throw. The hotdogs had been a small problem because first, we tried to find a special hotdog bread, but it was too complicated. So at the end, we found a shop in Rakvere where they sell bigger packages of the normal hot dog bread. Then we struggled to find the long sausages, but at the end, we finally found everything that we need. And the last step before the party was the final preparations. On Wednesday before the party, we had all the materials we needed and I started to put the crepe paper rolls on the ceiling and to put our self-made clowns and paper chains to the windows. I put already all the tables in front of the windows and cleaned them. On the next day, it should be the buffet table. When the children had been to art school I started to do the dough for „Mäuschen“ and it took nearly 3 hours to fry them all. Luckily one girl came and helped 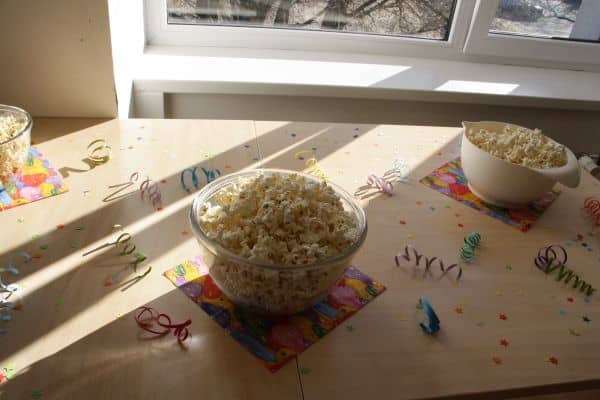 And the last step before the party was the final preparations. On Wednesday before the party, we had all the materials we needed and I started to put the crepe paper rolls on the ceiling and to put our self-made clowns and paper chains to the windows. I put already all the tables in front of the windows and cleaned them. On the next day, it should be the buffet table. When the children had been to art school I started to do the dough for „Mäuschen“ and it took nearly 3 hours to fry them all. Luckily one girl came and helped me to do them.

At the morning of the party, I did the last preparations and decorated the table with our paper curls and the confetti and some colorful napkins that I found. Then I mixed the juices and fruits together for the punchbowl and prepared the art room for the face painting. When the children entered our center they already asked for their costumes and we started to do their face paintings already before the official starting time at 14:14. Around three nearly all kids had their costumes and face painting, so we packed the things together and I went to the kitchen where my workmate already prepared the 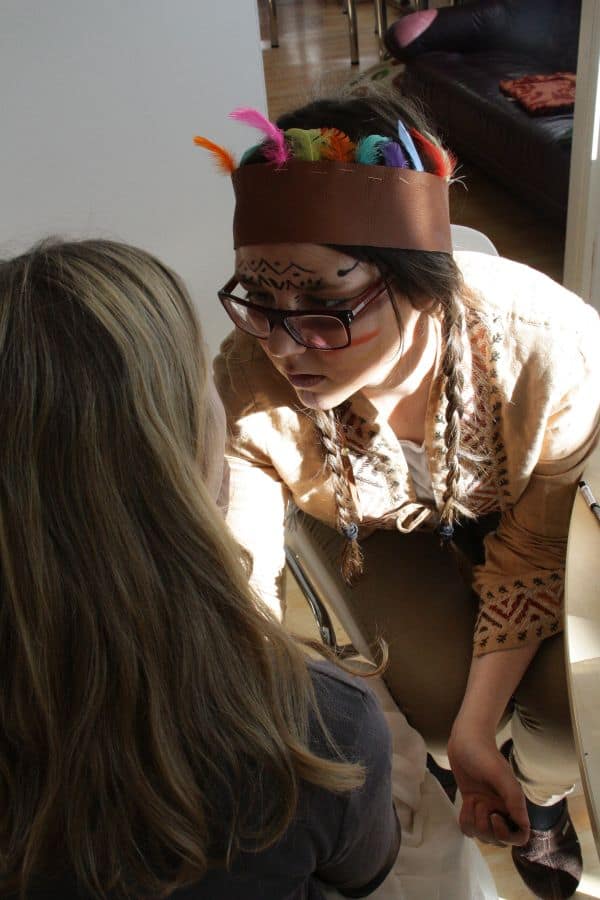 Around three, nearly all kids had their costumes and face painting, so we packed the things together and I went to the kitchen where my workmate already prepared the hot dogs and I started to do the three sorts of popcorn. When the table was ready the children started to get their hotdogs and drinks and also enjoyed the sweet snacks and popcorn. During the food break, I talked a bit about the carnival tradition in Germany and that there are different traditions depending on the region. After that, it was time to try out one tradition. It is like a dance and you are all standing in a line and put your hands on the shoulder of the person in front of you. To a special music, you move all together and try that the „snake“ is not breaking. We went through the whole house and it was funny when the children also screamed the typical exclamations like „Helau“ or „ Alaaf“. We went back to the party room and I showed the children some videos and pictures of the carnival traditions, some dances, and different events.

At 16:16 we did the next big event. It was this „Catch the Candy“ tradition. So I told the children to go outside to the backside of the house and I stayed inside and went to the windows of the art room and with my workmates, we threw lots of sweets outside with a loud „Helau“ and the children tried to catch as many sweets as possible. Some children did not really want to go outside, but when they came back with the sweets they all had been very lucky. We ate some more hot dogs and did a photo shooting with the costumes and some kids played role games with their costumes till the party ended. The last step ist the hardest one: be satisfied and happy that you have done it! I am always very self-critical that is why I would never say „Oh I did a great job and the party was the best party ever“. But the children had been happy and my workmates told me that they really liked the party. And if other people are satisfied and happy I can be that too. Moreover, I learned how to do my own project step by step and I realized that I can do it. I learned that there are also up’s and down’s and that not everything can be perfect. But that is just life and if you cannot get one thing you just have to make a comprise and things will work out well – or even better. I can just suggest everybody take this chance and try out if you can manage to do your own project. And I am very sure you will achieve your aim anyway – no matter how hard the way will be – you just have to believe it! 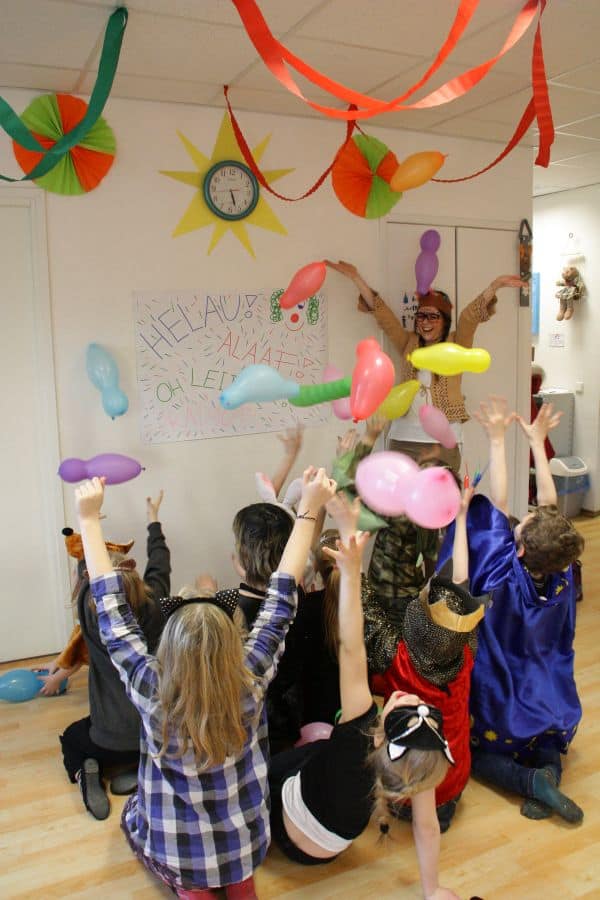 Annika Heinz stays in Estonia for 12 months within the project ”Care to Make a Difference” which is funded by Erasmus+ European Voluntary Service programme.