Meet Nefeli from Greece!04 June 2018Next 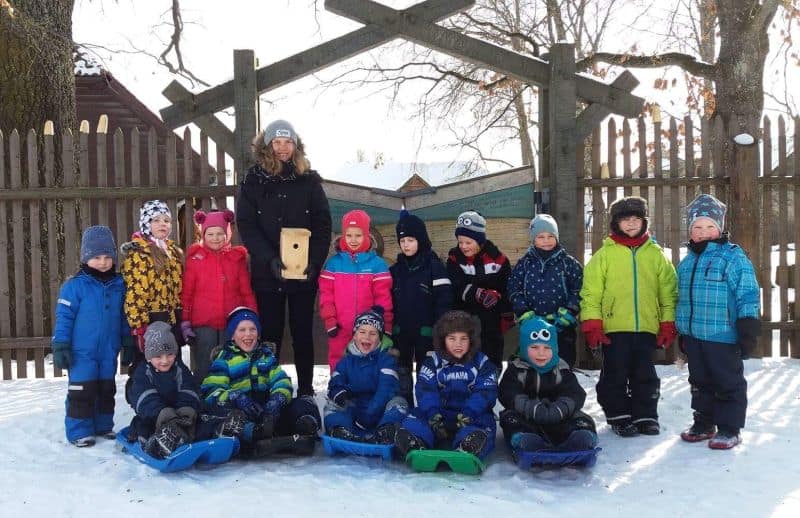 I’m Carla from Germany. I am 20 years old and I am doing my voluntary service in a kindergarten in Võru in South Estonia.

My idea was to establish a science corner this year in my group, because what I miss in the kindergarten here is that the children can do something creative or learn without specifications. I had very clear expectations so the science corner was supposed to be a free place for the children that they start with getting their own ideas. Moreover, it is a possibility that they can learn something with fun and because they want to and not because they have to. They can be creative and do not have to play with the same things always, but they can create new things. Furthermore, my plan was that this can be a timeout in a different room, away from all the trouble in the big room (my group is very noisy and often hard to handle) where they can do something different that needs a different kind of attention.

Egg in the water with salt

What is happening with an egg when you put it in water?

Ideas of the children: “It will break”

“The egg will grow”

So we tried it and nothing happened and the egg sank. We added salt to the water and so I asked what will happen if we put it now into the water?

Ideas of the children: “The egg will grow”

This time when we put the egg in the water it did not sink and the girls said: “The egg is dancing in the water”. Then we talked about where you can find salty water in the nature and that the water gets heavier with the salt and that is why the egg is swimming.

Gummybear in the water

What is happening when we put a red gummy bear in water over the weekend?

Ideas of the children: “The water will become red”

“The gummy bear will become white”

“The gummy bear will grow”

When we put the gummy bear in the water something unexpected happened. Some kind of white skin came from the gummy bear and went to the surface of the water. And after the weekend the gummy bear was bigger and transparent.All of the children wanted to try this experiment again at home. Maybe because they were also allowed to eat some and they were hoping for more.

Pepper on the water

We tried to figure out what happens if we put our finger in the water. Of course the children had known that their finger will become wet. Then we were putting pepper on the surface of the water and the children thought that their fingers are still getting wet. Normally, the finger is not going to be wet when you put it carefully. Of course the children were not that carefully so their fingers became wet again and there were right. After explaining that the pepper is building a skin on the surface but that it is not so strong they were more careful and it worked.

We had different kind of magnets, magnet powder and different materials where some are pulled by magnets and some not. We did that more often and they could just freely try everything out. We also took their favourite toys and a very special thing was that they were able then to turn the wheels with their magnets. One thing really made them despair when I turned the magnets the other way around and gave them the task to put the magnets together. They tried it for a very long time and did not understand how that is possible. 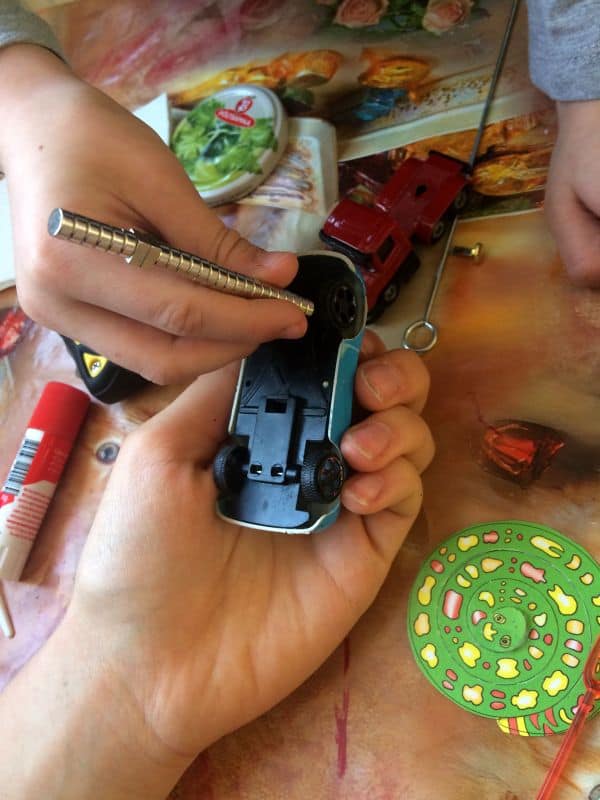 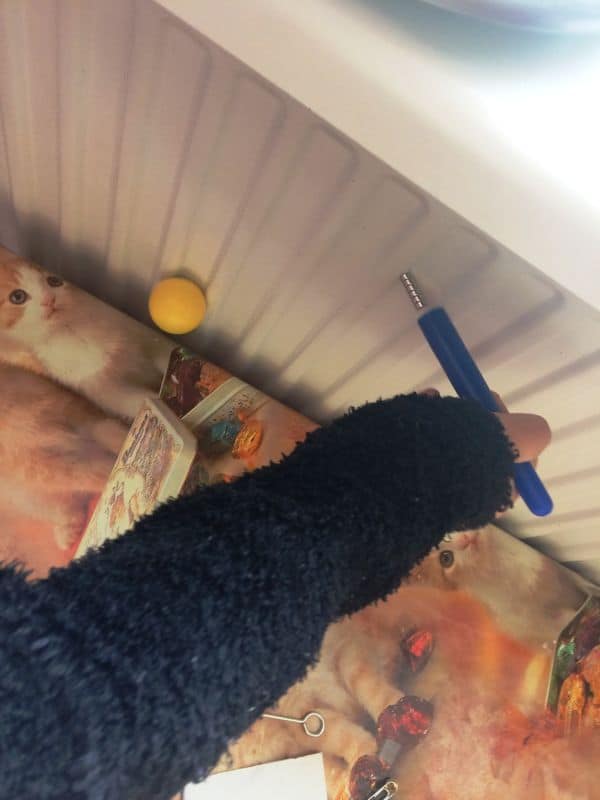 I did this with some girls and first I lead them a mirror and asked them to draw themselves but first they checked how their hair and clothes are looking. When they started drawing I really liked how carefully they were looking in the mirror to figure out how to draw and which colours to use. Afterwards we were writing and drawing what they like and what they want to tell about themselves. Moreover, we wanted to find out with a measuring tape how tall they are or how long their arm is. First they were very shy and I had to give a lot of ideas but in the end it does not stopped because they wanted to know the length of everything.

We were weighting 10 grams of sand and now we take a lot of different materials, especially very light ones and look how much we need to come to the same weight. Unfortunately, the Summer break came but I will continue that with the children after the break and then present to the others.

Even if we did some experiments I am not completely happy by now. My project did not fail but it also did not work out like I wanted it to work. Maybe my expectations were too high or I estimated the things wrong compared to the reality. Moreover, I would say that I missed a little bit the adoption and support from my group.

First, my tutor told me that there is one room in my group that is not really used where I can do something, but the teachers from my group did not want that. My tutor and the teachers from my group were very excited about the idea but we had to find another place for that. There is a lot of space in the end of the bathroom, where I wanted to do it then because it also has a connection to water. Everyone was fine with that, but it was not the best place as it turned out. The first thing was that the teachers first told me that this is my space then where I can do what I want, but then they were still doing other things there or when I started to put something it was not okay. A problem was that they were not clear with that before and that I was maybe not able to explain my project so clear that they will understand everything right. That is why I missed a little bit the room for that project. Furthermore, it is a problem that this room has to be open always for all the children, so it was sometimes hard to do the experiments without getting disturbed by other children and when I told them to go away they did not listen. 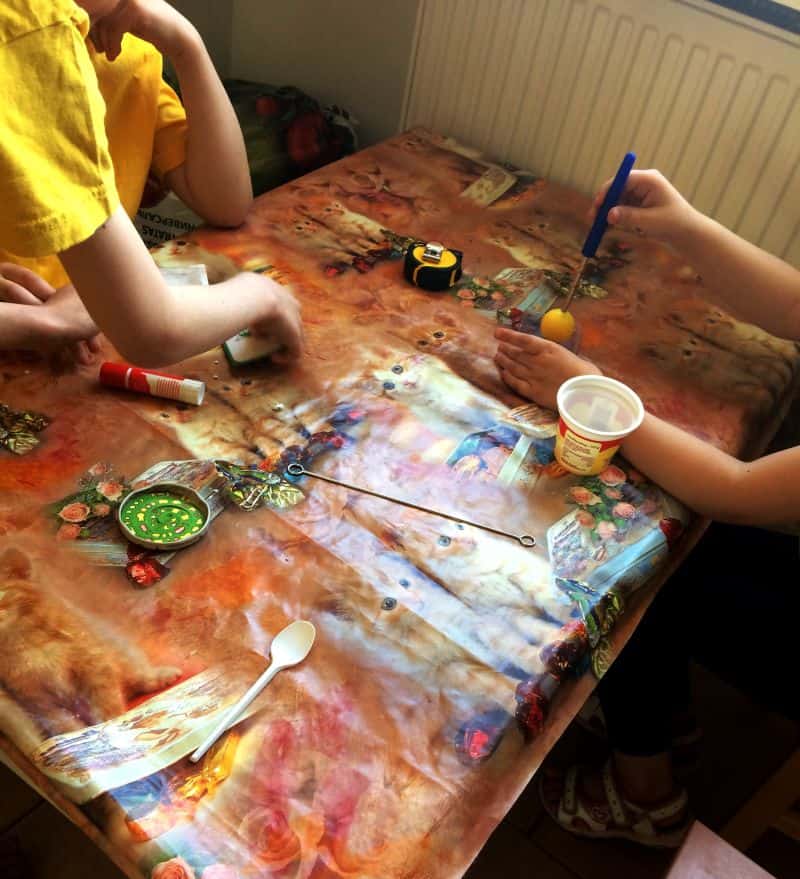 That is also one of the problems I had to deal with. I wanted the children to work alone there and develop their own ideas but still there were some clear rules. The rules were not about things that are forbidden, but about how the work in the science corner should be. The children were not taking care of these rules, because some of them have a problem to follow rules in general. In addition to that, it was unfortunately not possible to leave some of the children alone because they were doing just stupid things then or broke the equipment.

I wanted to buy the equipment that is needed to find things out but I wanted the teachers and parents to help me to always bring easy materials when they find something interesting they do not need anymore. At that point, I was thinking about materials with different shapes, different weights, different color, different kind for what they are used and with different surfaces. Unfortunately, just a few of the parents were helping out why I did not have the number of different materials as I expected it first.

One thing I planned was that there is one time a week the time and possibility for the children to show the other ones what they have done or what they found out. That is a nice opportunity for the children to get a good feeling about the fact that they found out something and the other ones will learn and get new ideas. It was often not enough time for that or when we tried it one time the other children did not behave very well and those that were supposed to talk were very shy. 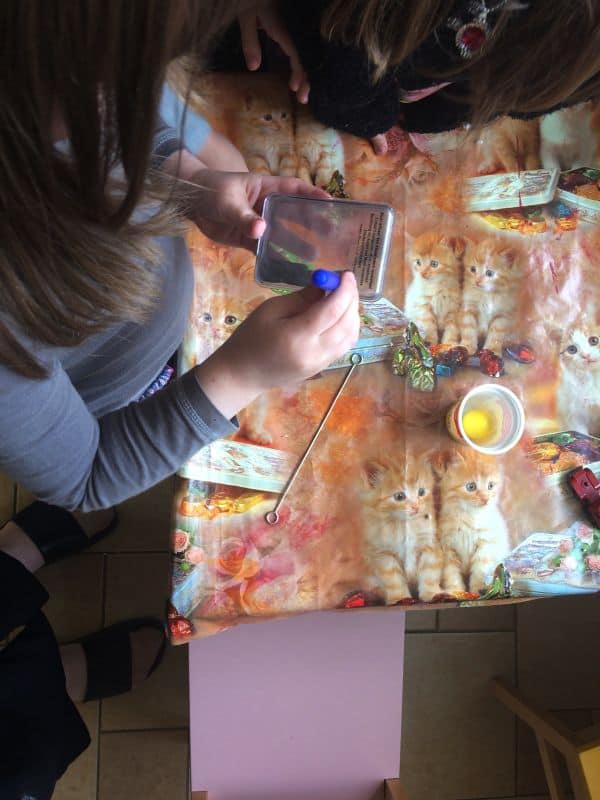 Time is the thing in general. We were so much outside with the children that there was not a lot of room to do something. Moreover, it is a long process to establish a science corner because the children have to get used to it. Nevertheless, I did some experiments and by now it sound quite negative but what I see is development.

I hope that I can bring my project nearer to my expectations in the last three month and that it will reach a point that it will go further even when my EVS is over.

Carla from Germany stays in Estonia for 12 months within the project “Boost the Mind” which is funded by Erasmus+ European Voluntary Service program.