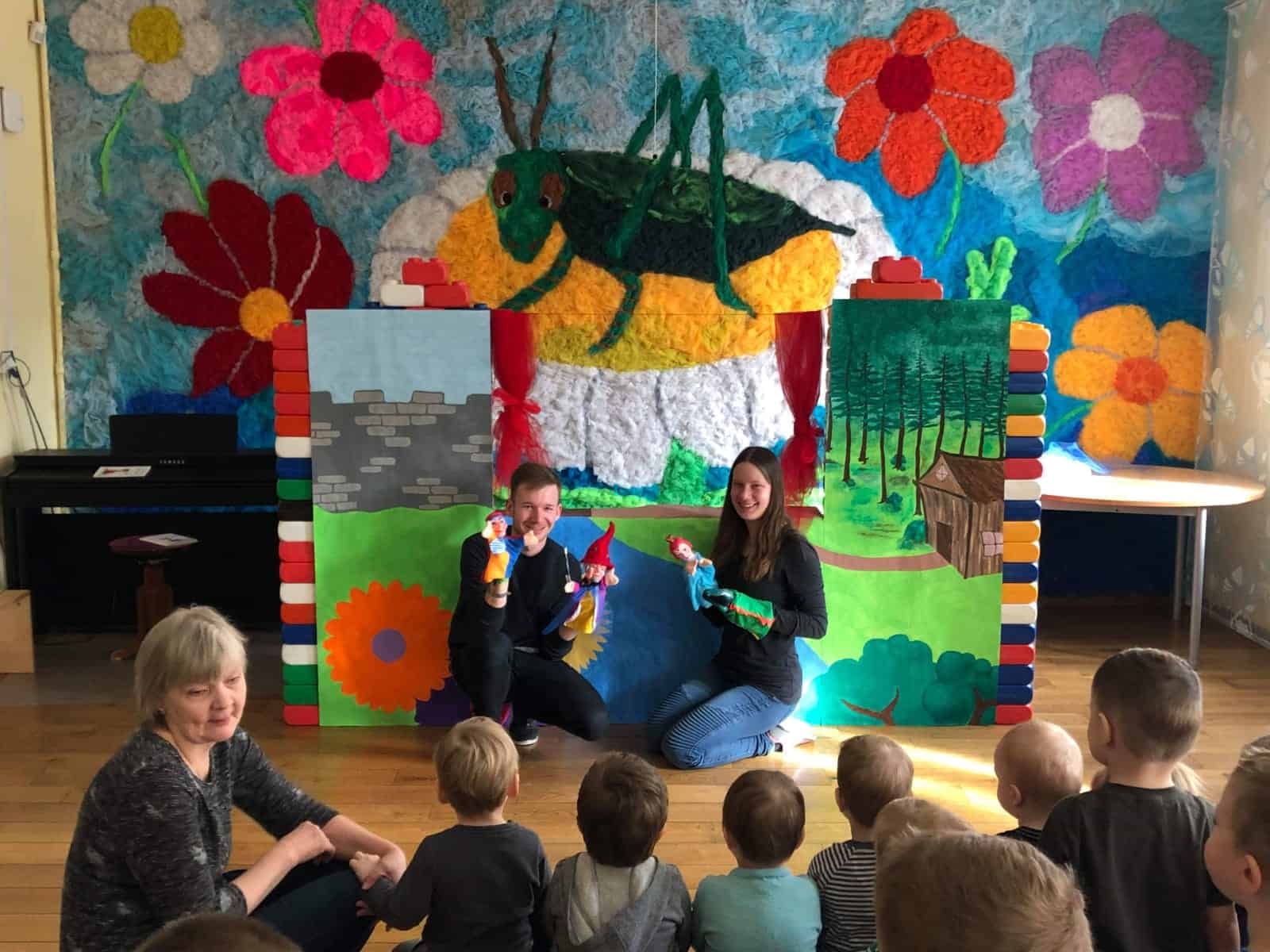 Our volunteers Laura and Matthias are doing their service within the project Volunteering in Educational Projects, which is funded by Erasmus+ European Voluntary Service program. They shared a story about their initiative project.

The idea – the idea of KasperlTo make activities for all children in a kindergarten might be often difficult to achieve.With our theatre play Kasperl, we can address that issue while presenting Austrian culture at the same time.

Laura and I are both volunteers at Kullatera lasteaed.She is assisting with the small three-year-old Lepatrinuds,whereas I am supporting the highly lively six-year-old Kullatrinud children. We have already done some activities for our two groups in the past. But we also wanted to do something everybody in the kindergarten can participate in. However, this turned out to be difficult since the children have not all equal abilities and the space is limited.That’s where the idea of Kasperl cames in –a hand puppet show everyone can watch.

Back to the roots

The theatre dates its routes back to the 18thcentury where it was the main figure of a hand puppet showmainly used at fun fairs. Starting as a rather primitive play for this setting, its meaning and form has changed over time. Nowadays, it isa popular child TV series in Austria,which was firstbroadcastedat 1957. Although it has been renamed into “Servus Kasperl” in 2008, children still can see it in public television.Building the stageOur Kasperltheatre was based on a prewritten story called “The bewitched princess”. The story is about a princess who gets transformed into a crocodile by a wizard. Fortunately, Kasperl comes to her rescue. The first step was to translate our play from German into Estonian. Our tutors helped us then by correcting our translation. And of course, we also needed a stage for our project. The idea was to use big LEGO bricks to build kind of a skeleton where we could place a big canvas in front, serving as the background. However, one important detail was still missing. Every Kasperl theatre plays in front of a red curtain which is also involved in the play. In order to have something similar, we formed two small curtains from tulle for the sides and attached them with a wireat the sides of the stage. Everything was now in place for the big performance.

The whole kindergarten could watch our play. Moreover, we successfully came across our initial problems. All groups were laughing a lot–so they apparently enjoyed it. And we had no problems with space because we made several performances with smaller groups.

On the 23rdof April, we visited another kindergarten –Linnupesa lasteaed–to show our play. It was again a great success, but there were other problems we had to deal with now. Our stage was different this time since there were no bricks in the kindergarten. And eventually, our fragile background canvas broke because of the many transportations.

Since we plan to visit more kindergartens, we had to make our background ready again. On the same time, we learned from the problems which our previous setting had. Finally, we started to make a real puppet theatre stage out of wood. So now we are having a short break where we make everything ready again. That means building a proper construction but also to paint it from scratch.This gives us also the opportunity to rethink the scene and make some visual adoptions. Because next time, the bewitched princess and Kasperl might have another adventure on their way back home.

Matthias and  is doing her service within the project Volunteering in Educational Projects (2018-1-EE01-KA125-046993), which is funded by the Erasmus+ European Voluntary Service program.